Today, everyone is talking about blockchain. Many people are already predicting that once blockchain becomes widely established, its societal impact will rival that of the Internet in the mid-1990s. The disruptive potential of blockchain and its applications can revolutionize a wide range of industries, including finance, news media, and transportation.

What Is Blockchain, And What Exactly Does It Imply?

A digital logbook might be a good way to describe it. Blockchain technology helps computers in various locations to keep current data in a permanent form while keeping all copies synchronized.

A blockchain is an open, shared database that is maintained by the nodes of a computer network. A blockchain keeps data in electronic form as a database. Blockchains are most well-known for their essential function in cryptocurrency systems, like Bitcoin, for keeping track of transactions in a secure and decentralized manner.

The blockchain’s greatest feature is its assurance of data accuracy and security and the creation of trust without using a trusted third party.

Blockchain technology is used in a variety of commercial activities. Despite its popularity, many individuals are unfamiliar with what it is and how it works.

Blockchain is a decentralized and highly secure database that uses distributed ledger technology. It is replicated across many nodes to ensure that the database remains accessible even if one or more nodes fails.

The activity on a blockchain is unchangeable and maybe a mix of private, public, or hybrid. It can’t be changed or deleted; it can only be added to by agreement among most network users.

Public blockchains like Ethereum and Bitcoin are pseudo-anonymous, but actors can be identified in private or hybrid networks. It’s also decentralized since authority doesn’t regulate it. It’s a brand-new technological paradigm that eliminates third parties and allows for the execution of any transaction.

Blockchain is an innovative technology that creates a secure, decentralized digital ledger of economic transactions. It has some characteristics that set it apart from bitcoin and other cryptocurrencies. The following are properties of blockchain and the reasons for its popularity:

Because information within a block is not alterable without changing the subsequent blocks, there will be a mismatch between the embedded digital signatures.

The whole blockchain is shared by all of the computers in the network. The authority does not run it.

The sender and recipient’s actual currency is never exchanged; only their data is shared and verified in the blocks.

It is public but also anonymous.

Blocks are public (duplicated on all network nodes) yet nameless (because of hashing). The public nature implies that anybody may track transactions using mining, which is good for transparency.

There is regular verification of transactions.

Every 10 minutes, transactions are verified through mining. Numerous attempts have been made to produce digital money in the past, but they have all failed.

The critical problem is trust. If a person creates a new currency called the X dollar, how can we be sure they won’t give themselves a million X dollars or steal your money?

Bitcoin’s creators designed it to address this issue by using a decentralized database known as a blockchain. Most traditional databases, such as an SQL database, have a leader who can modify entries.

The above blockchain glossary highlighted everything you should be aware of. This blockchain glossary for beginners is intended to increase public awareness of blockchain by educating potential users and customers about the technology, its history, and current applications in the market.

One Cancels The Other (OCO) 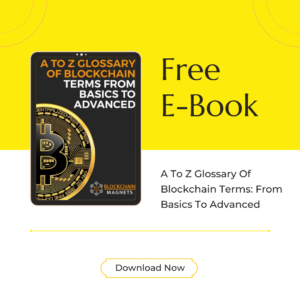